The function of the direct acting relief valve is to relieve system pressure at a set point, thus limiting the pressure in a hydraulic system. The hydraulic pressure  limitation is there for several reasons:

How does a direct acting hydraulic pressure relief valve work?

The image to the right shows an artist’s impression of a relief valve, the fluid enters the chamber on the left shown by the arrow and "P". 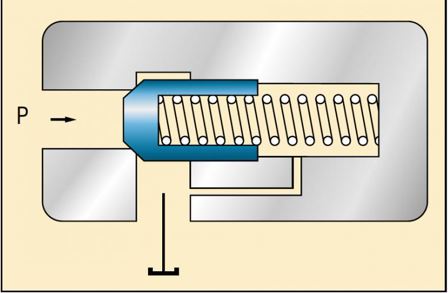 The blue poppet or sometimes a cone or a ball bearing covers the entrance and is held in place by a spring. The spring force can be varied by compressing via a mechanical screw. As the hydraulic fluid pressure in the "P" line increases it will eventually overcome the force keeping the poppet in place, thus allowing the fluid to travel back to the reservoir more commonly known as tank. This balance of forces will remain until the hydraulic pressure in the system decays.